The path running alongside a canal is called a towpath. Today it is mainly used by walkers and cyclists but for most of the canal’s history it was trodden by horses, the engines of the canal system, pulling boats.

A pack horse on the road could carry around an eighth of a ton. On a level rails, a horse could pull 8-ton waggons. On the canal however, a single horse could easily move a full boat weighing 30 tons. Before the development of steam railways, this was by far the best method to move large supplies of heavy materials over longer distances.

Horses pulled boats on the canals even after powered boats became common at the end of the nineteenth century. For speed, horses could compete with steam or even later diesel engines on shorter journeys, but engine-powered boats could work day-and-night over long-distance trips.

Commercial boat activity began to give way to tourism after the 1940s but horses were not suitable for leisure craft, because of the upkeep and responsibility required. Horse-boating nearly disappeared completely but a few people sought out the last boatmen who had worked with horses and learned the skills needed to keep the tradition alive.

The last remaining Shropshire Fly Boat, ‘Saturn’ is drawn by horse. In this film it is starting its journey from Chester to Ellesmere Port for the 2009 Historic Boat Rally. Fly Boats worked non-stop, day and night, changing horses as they went along, to make reliable timetabled deliveries between towns.

David Johns takes a trip along the Montgomery Canal at Welshpool. The small boat Countess is drawn by Cracker the horse. This is one of a handful of horse drawn pleasure boats working on British canals.

Sue Day of the Horse Boating Society talks about using horses on the Leeds and Liverpool Canal. She talks about training horses and retaining the old skills used to help them navigate the canals.

There was no specific breed of canal horse. Animals were chosen for their strength and stamina. They could not be too tall, to allow them to pass under the low bridges. Boatmen usually worked with the same horse every day and they were valued members of the crew or even the family.

A collar fits around the neck of the horse and sits on its shoulders. Collars are made of leather and padded with straw to provide a soft cushion for the horse to push against. The collar separates at the top so it can be easily removed if the horse goes into the water.

The harness that fits over the horse’s body is made of leather straps. Running along the sides are the traces, ropes attaching the collar to the boat. The ropes have wooden bobbins threaded on them to prevent them from rubbing the flanks of the horse. The bobbins were often colourfully painted.

Behind the horse, the traces connect to a horizontal pole called a spreader bar, sometimes known as a swingletree. This keeps the traces apart so that they do not squeeze the horse’s flanks and back legs. The rope to the boat is attached where the traces come together, or to a hook on the bar.

Canal horses sometimes wore blinkers either side of their eyes. This kept them focussed to the front, so that they weren’t distracted or frightened. On some parts of the canal system, they also wore crocheted hats to protect their ears from flies. These were made by boatwomen.

A cotton rope was used to pull the canal boat. It was connected to a short mast on the top of the boat, set back from the bow at the front. If the rope was attached lower down, directly onto the bow, the boat would be constantly pulled into the bank.

As the boat ropes got wet and covered in grit from the towpath, they became very abrasive. On many older bridges over the canal, you can see grooves on the corner stones of the arches, worn by the rubbing of ropes that passed under them for many years.

The railings beside the towpath in the tunnels at Chirk and Whitehouses are to prevent the horses from falling into the canal in the dark. At each end of the tunnels, the railings slope up from the ground, so that the tow ropes slid up them and didn’t snag on the ends.

Chirk and Whitehouses tunnels were some of the first in Britain to have towpaths through them. At older tunnels the horses were walked over the top and the boat had to be legged through. Legging was done by two men lying on their backs and pushing their feet against the tunnel wall.

Horses were valuable to families and canal companies that owned them, and they were generally well treated. They were rested overnight in canalside stables to keep them warm. They were fed highly nutritious food, often from feed tins that attached to the bridle, so they could eat as they continued working.

Many people were employed along the canal to look after horses. Grooms ran stables, stores sold feed and the canal companies employed inspectors to check the animals were well cared for. Blacksmiths found frequent work at canals as farriers, because horseshoes only lasted four to six weeks and needed constant replacing.

Boat horses generally worked from age four for about 20-25 years. The oldest horse that ever lived was a boat horse from the Mersey and Irwell Navigation, called Old Billy. He lived to be 62, twice the normal age for a horse. He became famous enough to have his portrait painted several times.

Donkeys were also used to pull canal boats, particularly up until the late nineteenth century. They are smaller than horses and not as strong, so they were often worked in pairs. They are very hardy however, and don’t need shoes or such high-quality food, so they are cheaper to keep. 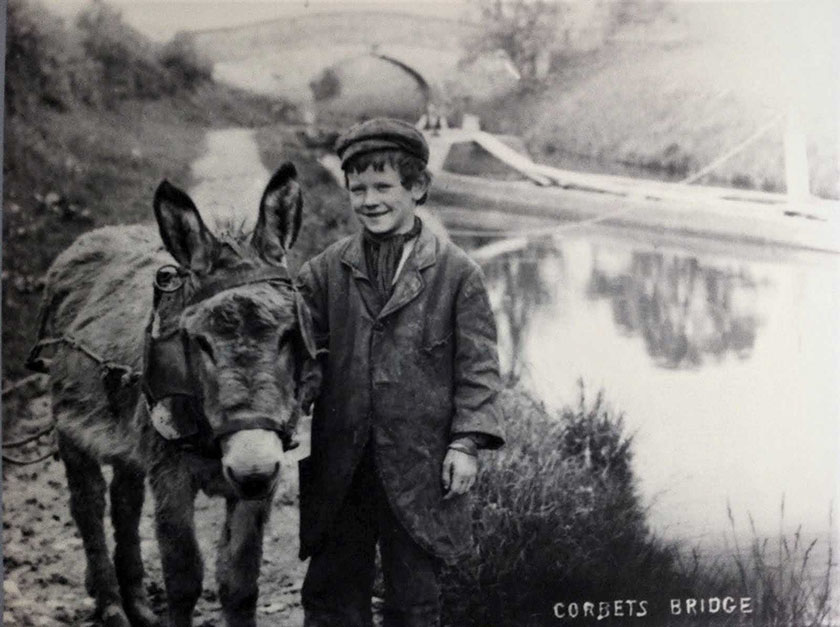 A mule is a crossbreed between a horse and a donkey. Mules were sometimes used to pull canal boats, although this was more common in the USA than in Britain. American boatmen said that mules were less likely than horses to jump in the water if they are thirsty or hot.

An unusual experiment was held in the late 1880s, to see if steam engines on rails along the towpath were more efficient at pulling boats than horses. The trial was not a success. Horses continued to haul canal boats, although onboard steam engines would soon start to challenge their dominance.

There are very few boats pulled by horses on British canals today. Most operate as pleasure boats, giving short rides to tourists. The Horse Boating Society maintains the traditional methods of managing horses on the canal. They visit events to demonstrate the skills needed to operate a horse-drawn working boat.

Skip back to main navigation