When Pontcysyllte Aqueduct and Canal was designated a World Heritage Site in 2009 it was the first one in the UK to straddle two countries.

Two hundred years earlier industrialists were keen to link Liverpool and Bristol by creating waterways between the Rivers Mersey and Dee to the River Severn at Shrewsbury. To serve the industrial areas around Wrexham and Ruabon the canal needed to cross the deep river valleys of the Ceiriog and Dee.

Click on any Point of Interest marker to view the description 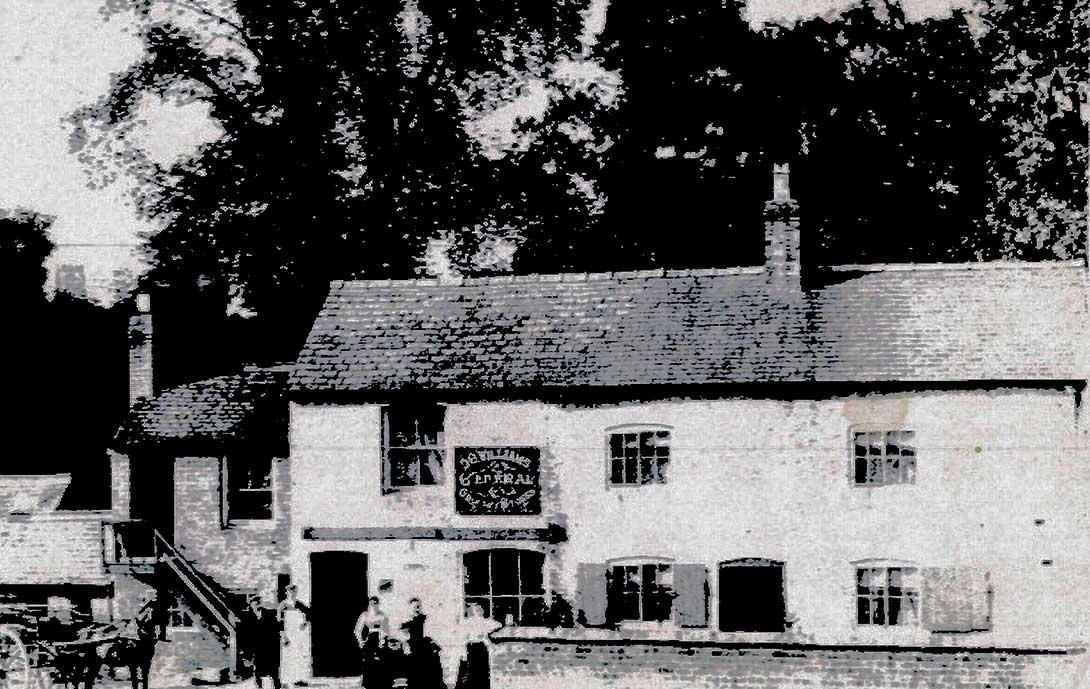 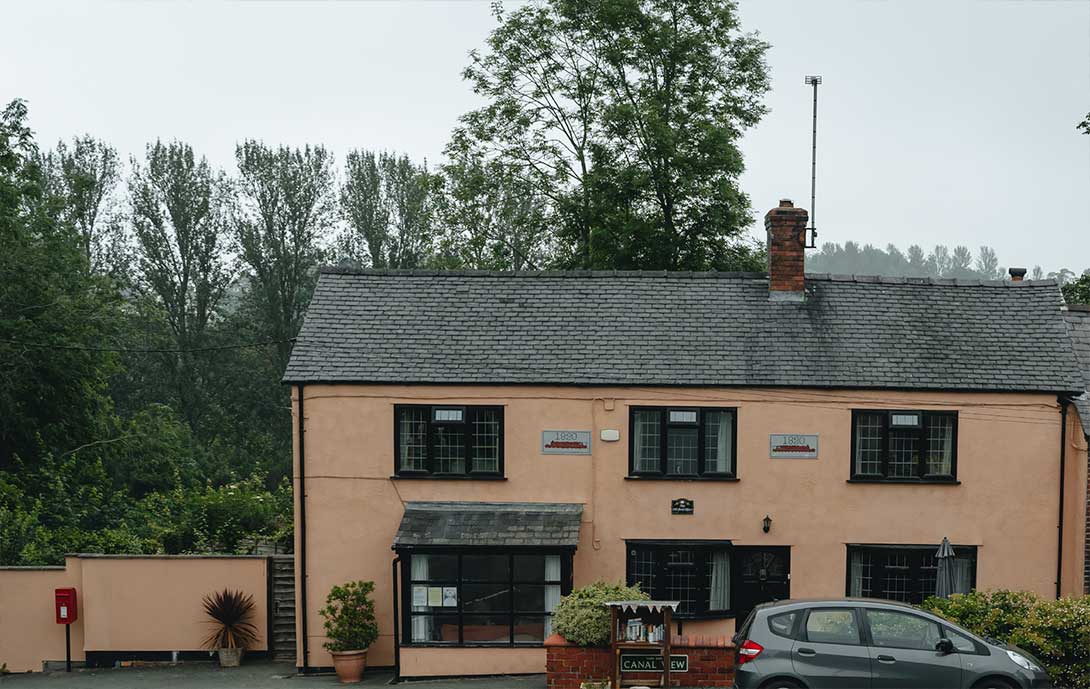 Original proposals for the Pontcysyllte Aqueduct and Canal World Heritage Site focused on the aqueduct but it soon became apparent that a much stronger case could be made by including a larger area which included additional novel engineering solutions.

Gledrid Bridge, a short distance across the border into Shropshire, was chosen as the boundary for the World Heritage Site on the English side as it is here that the challenges in building the canal began.

…the mallards often seen by the bridge

Gledrid Bridge was built in 1796 in the style typically used along the canal. It is one of the few bridges in the World Heritage Site that was built of brick rather than stone, as the canal was yet to reach the supplies of good building stone a little further on.

The grooves on either side under the bridge are where wooden ‘stop planks’ are used to block off a section of the canal so that it can be drained for maintenance or to conserve water in the event of a major leak. Usually these grooves or slots were cut in to the stonework at a narrow point, such as the underside of a bridge. Where there was no convenient structure, a pair of stone walls were built from the canal banks for this purpose.

All canal bridges are numbered and Gledrid has an oval plaque marked with 19W. Bridges on the Llangollen Canal are numbered from 1W at Frankton Junction through to 49 at the end of the canal near Llangollen.

FIND OUT MORE ABOUT BRIDGES...

This waterside pub next to Gledrid Bridge has provided refreshments for generations of travellers. It was built between 1752 and 1838, almost certainly as the canal came into operation. The 1838 tithe map shows the site occupied by an inn with offices, a yard, garden and a malt house. It also provided stabling for horses, possibly used by some of the horses that pulled the canal boats.

Originally called the New Inn, it became Poacher’s Cottage in the late 1900s and was also known as Poacher’s Pocket before becoming The Poachers.

Arthur Hughes sold the New Inn by auction in 1875. The sales details claimed it to be an old established and well-frequented public house with a brewery, malt kiln, stabling for 14 horses and some excellent pasture land. The public house was described as being ‘roomy and convenient’ and included a parlour, bar, a large club room and six good bedrooms. To tempt the prospective buyer further the advert stated that the property, under which valuable seams of coal were believed to lie, was in the middle of a rapidly increasing colliery district and a thriving population, and the lucrative brewing and general business was capable of a wide extension. It’s lucky that someone didn’t buy it to exploit the coal underneath!

James Edwards from nearby Weston Rhyn later bought the New Inn to add to the cluster of 8 pubs he owned in the area, including the Bridge Inn at Chirk Bank. In the 1920s the pub was bought by Wolverhampton & Dudley Breweries Ltd, which more recently became Marstons.

Many of the outbuildings were demolished over the last 100 years. However a large renovation took place in 2013 when the pub was renamed and extended to create an atmospheric country pub serving traditional food and drink.

Quinta – Trehowell Collieries were originally served by the canal. Quinta Colliery, situated about a mile from the canal, was part of the Quinta Estate, owned by Chirk Castle Estate in the early 1800s.

Thomas Barnes, the MP for Bolton in Lancashire, bought Quinta Estate in 1855. He built a horse drawn tramway to take the coal to the wharf at Chirk Bank around 1870 but the route was soon superseded by the arrival of the Glyn Valley Railway. The colliery was in operation for about 50 years until it closed in the early 1900s.

The remains of the wharf are on a flat terrace above the canal but are not visible today.

Chirk Bank Bridge is also known as Monks Bridge, probably named after a nearby property shown on the 1884 OS map as Monk’s Croft. The bridge was innovative as it was one of the earliest bridges to use cast iron beams supporting a very flat stone arch. This allowed traffic to cross the canal without the steep approach found on typical humpback bridges. The bridge carried the original turnpike road from Oswestry to Wrexham and Llangollen.

Canal View Cottages were built in the early 1800s. Number 1 was a store and warehouse but later became a shop and post office until it closed in 2000. Today only the post box outside gives a clue to its past while Forge Cottage was once a blacksmith’s.

Goods were transferred between road and canal from public wharves on both sides of the bridge. A warehouse and stables remained until 1933.

The three storey building on the opposite side of the canal was a former coaching inn with stabling for horses.

The huge Chirk Bank terrace embankment was made by cutting into the hillside and placing the spoil on the lower slope, so that the canal and towpath are partly on cut ground and partly on made-up ground. It stretches almost three quarters of a mile from Chirk Bank Bridge to Chirk Aqueduct where the canal is carried across the Ceiriog Valley. The highest point of the embankment by the Aqueduct is 18.3m high and 60m across at its base.

Some shallow coalmining probably took place in Chirk Meadow next to the River Ceiriog in the 1600s, but it was when work started on the canal embankment that a rich coal seam was discovered. Jebb and Davies, contractors building the canal, made the most of this discovery by developing Chirk Bank Colliery around 1801.

Sadly in December 1816, after a long period of rain, water from the canal cascaded down the embankment causing great damage to the colliery. Fortunately there was no loss of human life because for the first time in many years the workmen were enjoying a holiday, but all the coalmine horses drowned. Although mining activity had probably weakened the embankment, a court case decided that the canal company was responsible for the breach and should pay damages.

The colliery passed into the ownership of Plas Power Estate and operated until the 1880s. Records show tithe payments made during this time, paid to support the parish church and its clergy. Originally these payments were made in kind, such as crops, wool and milk and usually represented a tenth or tithe of the yearly production of cultivation or stock rearing but were later paid in cash.

Aqueduct Cottages were built by the Shropshire Union Railways and Canal Company in 1874 for canal maintenance workers and also for men working on the Glyn Valley Tramway.

The two red brick detached houses were occupied by foremen. Each had a toilet and a pig sty at the end of their gardens which was common for rural properties built at this time.

In the early 1900s Evan Baines lived with his wife Jane and his 11 children in ‘Cartref’, Number 6, Aqueduct Cottages. Evan came from a family of boatmen and coal merchants from nearby St Martins and worked for the canal company. He extended the house for his growing family and for use as offices. The house stayed in the ownership of the Baines family, with descendants of the next generation being born there, as originally it could only be passed on to a member of the family.

Later the property was sold to Neville Hurdsman, one of the managers at the Cadbury factory in Chirk. An avid local historian, Neville carried out a vast amount of research on the local area and wrote a book about the history of Chirk.

The two pairs of cottages in between the detached houses have also been sold off by the original families. Today one of them is home to canal enthusiasts and keen bell ringers at St Mary’s Church in Chirk. Their boat is named Sally after the fluffy end of a bell ringers’ rope. There are quite a number of bell ringers who also own canal boats and it is quite common for groups of bell ringers to get together and visit church towers along the canals.

When the Chirk bells were recast at Gloucester in 1814, it is likely that they were taken by sea to Chester or Ellesmere Port and then by canal to Chirk.

Skip back to main navigation